Constructed in 1953, the Ottawa Wastewater Treatment Plant is now a regional facility servicing the Villages of Ottawa and Glandorf, along with portions of Ottawa Township. Treated water from the plant discharges to the Blanchard River, which is a tributary of the Maumee River. 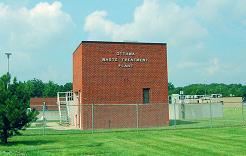 
Originally a conventional activated sludge plant, the facility was expanded and the treatment process converted to contact stabilization in 1968. In order to save money through reduced power usage, new systems for diffused air aeration, grit removal and final settling tank scum removal were added to the plant in 1985. A new blower building and a phosphorous removal facility were also constructed at the same time.


Completed in 1999 at a construction cost of $4.5 million, the most recent improvements project at the Ottawa Wastewater Treatment Plant has expanded its daily design flow capacity from 1.7 millions of gallons per day (MGD) to 3.0 MGD. The expansion was needed to help the plant handle increased flows due to residential growth and the influx of new industry throughout the service area.

Preparing For The Future


Financed through the Ohio EPA Water Pollution Control Loan Fund, this newly expanded plant can accommodate future expansions to 4.5 MGD. An oxidation ditch was added to the facility to allow for greater flexibility and ease of operation, as well as to accommodate variable flows and loadings. The oxidation ditch operates in an extended aeration mode to achieve ammonia removal through nitrification. Other additions to the plant include two 75-foot-diameter final settling tanks and two ultraviolet disinfection channels. The existing ultraviolet disinfection equipment was relocated in one of the new channels to provide a total disinfection capacity of 5.0 MGD. A new sludge pumping and generator building provides pumping facilities for return and waste activates sludge as well as standby power for emergencies.


Rates for industrial users located within the Village corporation, with an average daily use of 25,000 cubic feet or more, may be negotiated.